Usage statistics for Pilot and Round 2 e-books now available

Knowledge Unlatched can now reveal the first download figures for KU Round 2 titles that have been unlatched so far.

In Round 2, 78 new Humanities and Social Sciences e-books from 26 publishers were made Open Access through the support of both individual libraries and library consortia from across the globe. These books are available on the OAPEN and HathiTrust platforms for anyone to download as PDFs on Creative Commons licences.

Since the unlatching of Round 2 started in March 2016, there have been 37,691 downloads in at least 168 countries for the 75 books which have been unlatched so far. These COUNTER-compliant statistics are from the OAPEN platform.

In addition, KU is proud to say that the 28 titles from the Pilot Collection have now reached 82,143 downloads in at least 184 countries (via OAPEN and The Internet Archive). This averages to 3,000 downloads per book.

An interactive map showing downloads from OAPEN’s platform can be found on our Usage Statistics page.

HathiTrust, KU’s other official host, has reported a further 24,166 individual page views for books in the Pilot and Round 2 Collections.

Libraries who supported the unlatching of the Pilot and Round 2 titles receive their own institutional usage statistics report based on their IP addresses at http://app.knowledgeunlatched.org 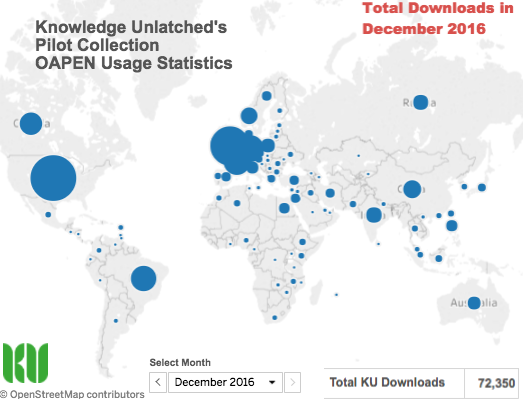